In April, an analysis of Dr. Web’s statistics revealed a 34.5% decrease in the total number of threats compared to the previous month. The number of unique threats dropped by 11.42%. Adware and malware browser extensions still made up the majority of detected threats. The Trojan.SpyBot.699 banking trojan along with malware that exploits vulnerabilities in Microsoft Office programs were the most frequently detected malicious software in email traffic. In addition, the most common threats included malicious HTML documents distributed as email attachments and redirecting users to phishing websites.

In April, the number of user requests to decrypt files affected by encoders increased by 34.27% compared with March. Trojan.Encoder.26996 was the most active encoder, accounting for 32.71% of all incidents. 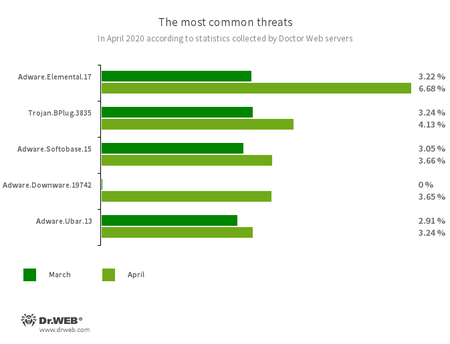 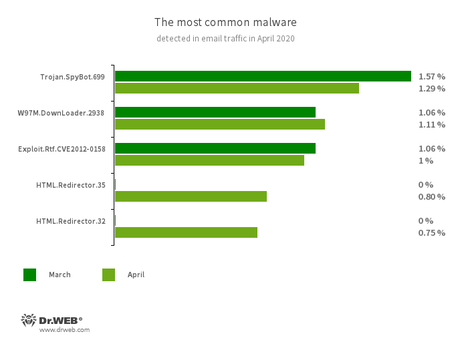 Trojan.SpyBot.699
A multi-module banking trojan that allows cybercriminals to download and launch various applications on an infected device and run arbitrary code.
W97M.DownLoader.2938
A family of downloader trojans that exploits vulnerabilities in Microsoft Office documents and can download other malicious programs to a compromised computer.
Exploit.CVE-2012-0158
A modified Microsoft Office document that exploits the CVE-2012-0158 vulnerability in order to run malicious code.
HTML.Redirector.35
HTML.Redirector.32
Malicious HTML documents that are often disguised as harmless email attachments. Upon opening, the code redirects users to phishing websites or downloads payload with malware to the computers.

In April, the total number of threats on Android devices increased by 16.46%, as compared to March. The Doctor Web laboratory uncovered new threats on the Google Play catalog. These include other modifications of the Android.Circle family, which spread under the guise of harmless applications and were executing criminal commands. In addition, Doctor Web virus analysts added new signatures for the Android.HiddenAds.2124 advertising trojan and the Android.Joker.164 malware program, which subscribed victims to paid services and ran arbitrary code.