In July Dr.Web’s statistics showed a 54.21% decrease in the number of detected threats compared to June. While the unique threats almost doubled. E-mail traffic was dominated by malware that uses Microsoft Office programs’ vulnerabilities. Adware and unwanted programs still occupy the top of all detected threats. The lead ransomware in July, Trojan.Encoder.858, accounted for 21.15% of all requests for data decryption received in support of Doctor Web.

Doctor Web’s researchers have prepared a study that describes trends in the most common threats for smart devices and the Internet of Things (IoT) as a whole. This review is based on statistical data that has been gathered from our honeypots since 2016 and intends to draw attention to the security problem in the field of IoT. 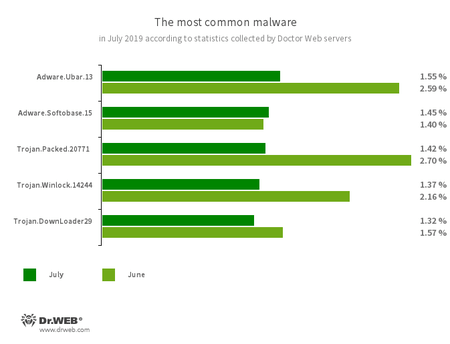 Adware.Ubar.13
A torrent client designed to install unwanted programs on a user’s device.
Adware.Softobase.15
Installation adware that spreads outdated software and changes the browser’s settings.
Trojan.Packed.20771
This program installs malicious browser extensions that redirect search results to different websites.
Trojan.Winlock.14244
A ransomware trojan that blocks or limits a user’s access to the Windows operating system and its functionalities. In order to unlock the system, a user must transfer money to the cybercriminals.
Trojan.DownLoader29.14148
Downloads and runs malicious software without the user’s permission. 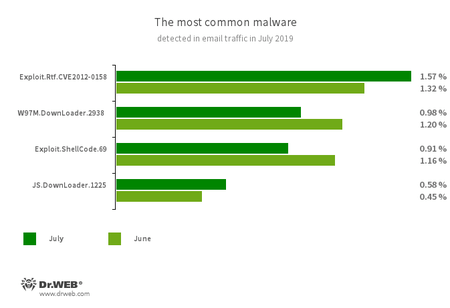 In July, the most common cases involving the following ransomware were registered by Doctor Web’s technical support service:

Among other detected threats were new trojans of the Android.HiddenAds family, which hid their icons from the main screen and displayed ads. Additionally, Doctor Web analysts discovered several programs with embedded the advertising module Adware.HiddenAds.9.origin. They displayed banners even while being closed.

New entries for detecting trojans of the Android.Spy family, which were used for cyber espionage, were added to the Dr.Web’s virus database.

Find out more about malicious and unwanted programs for mobile devices in our monthly review.