August 2015 witnessed the appearance of a new Trojan designed to infect routers running Linux and a new dangerous miner that has a set of features typical of worms and can spread across a network by itself. Moreover, in August, security researchers detected a downloader Trojan distributed in Microsoft Word documents, an installer of unwanted applications belonging to the LoadMoney family, and a number of new malicious programs targeting Android.

With the appearance of electronic currency, virus makers were given an opportunity to find a new way of stealing money from users—for that, miner Trojans were created. However, as the amount of resources that needed to be spent on creation of such applications constantly grew, cybercriminals started loosing their interest in this sphere. Nevertheless, in August, Doctor Web analysts had another chance to examine a Trojan belonging to the mentioned category. The malicious program was named Trojan.BtcMine.737.

On the inside, Trojan.BtcMine.737 looks like a Russian doll—it consists of three installers nested in each other. The first “layer” contains a simple dropper that, once launched, tries to kill all processes of Trojan.BtcMine.737 if they are running. It also extracts an executable file of another installer from its body, plants it into a temporary folder, runs it, and deletes the original file. The second installer has a wider set of features that are typical of network worms. When activated, this installer saves the executable file to some folder on the infected computer and runs it. Then it replicates itself to several folders making one of them accessible from the local network. The installer's copies look like WinRAR archives with the Key name. 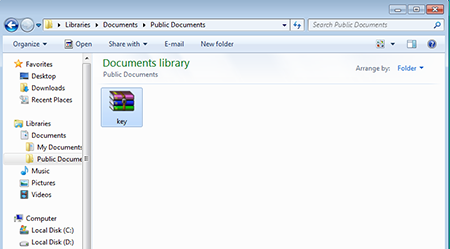 After that, the malicious program copies itself to root folders of all hard drives and goes through all computers in network places trying to connect to them by using logins and passwords from a special list. Moreover, if necessary equipment is available, Trojan.BtcMine.737 sets up an open Wi-Fi access point. If a connection to any computer on the network is established, the Trojan tries to replicate itself to that computer and run the copy. The CNminer.exe program, saved to a hard drive by Trojan.BtcMine.737 during the second step of the installation, is, in fact, the installer of a mining utility. Find out more about the malware in this news article.

In August, Doctor Web security researchers continued to monitor two subnets belonging to the botnet created by cybercriminals using the Win32.Rmnet.12 file infector. Their average activity is shown in the following graphs:

The botnet consisting of computers infected with Win32.Sector is still active. Its average daily activity can be seen in the following picture:

In August, cybercriminals controlling the Linux.BackDoor.Gates.5 botnet became more active and intensified their attacks on various Internet resources—in comparison with the previous month, the number of attacked IP addresses increased by 118.3 per cent and was estimated 2,083. As before, most targets of the attacks were located in China (86.7 per cent), while 10.7 per cent of compromised websites were hosted in the United States.

The most common ransomware programs in August 2015

One of those Trojans, dubbed Linux.PNScan.1, was distributed in a rather peculiar way—Doctor Web analysts presume that initially Linux.PNScan.1 was installed on attacked routers by virus makers themselves. For that, they exploited the ShellShock vulnerability running a script with relevant settings. Subsequently, the malware got uploaded and installed on devices by Trojans belonging to the Linux.BackDoor.Tsunami family, which, in turn, are distributed using Linux.PNScan.1. This malicious program serves the only purpose—to brute-force router access passwords. If the hacking attempt is successful, the Trojan uploads a malicious script that downloads and installs backdoors based on the router architecture (ARM, MIPS, or PowerPC). The script can also download a relevant backdoor if by exploiting the Shellshock vulnerability cybercriminals succeed to hack an Intel computer (x86). The mentioned backdoors can execute various intruder-issued commands. For example, upon a command from cybercriminals, the applications can download Tool.Linux.BrutePma.1. This tool is used to hack administrative control panel of PHPMyAdmin which is used to manage relational databases.

Moreover, on servers controlled by cybercriminals, Doctor Web analysts detected other malicious programs among which is a modification of Linux.PNScan.2 and a Trojan named Trojan.Mbot whose main task is to hack websites. Another detected Trojan was dubbed Perl.Ircbot.13. It serves the purpose of looking for vulnerabilities in websites created on a number of CMS platforms and in websites that use certain online-store management systems. 1,439 devices are known to be infected with the mentioned malicious programs; at that, in 649 cases, geographical location of infected devices was also determined: 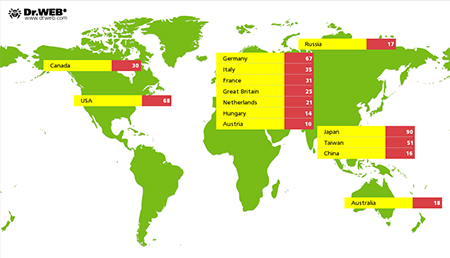 More information about the malicious programs detected by Doctor Web security researchers and details regarding the mentioned incident can be found in this news article.

In August 2015, Doctor Web security researchers examined a dangerous downloader Trojan named W97M.DownLoader.507 and distributed as a Word document attached to email messages. To be able to read the contents of such a document, the user is prompted to enable macros in Word. 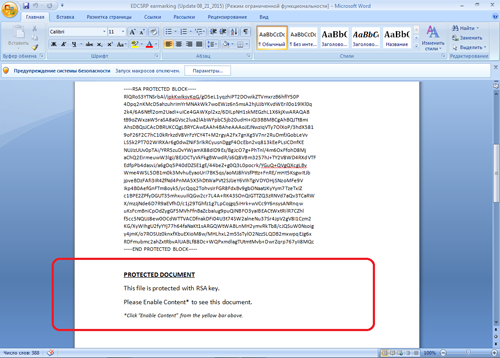 After macros are activated, the text is shown to the victim. At the same time, the Trojan starts downloading several code fragments from the remote server. Using these fragments, the malicious program generates several scripts which, in turn, download from the server controlled by cybercriminals a dangerous banking Trojan and then run it. Find out more about the Trojan in this news article.

Another malicious application examined in Doctor Web virus laboratory in August is called Trojan.LoadMoney.336. This installer of unwanted programs can be found on personal computers quite often. The Trojan's distribution scheme looks as follows: if the user attempts to download some file stored on a file-sharing resource controlled by cybercriminals, they are redirected to a website from which Trojan.LoadMoney.336 is downloaded to the computer. Once launched, the Trojan connects to a remote server and receives a configuration file. The file contains links to different affiliate applications (sometimes malicious ones) that the Trojan downloads and runs on the infected computer. 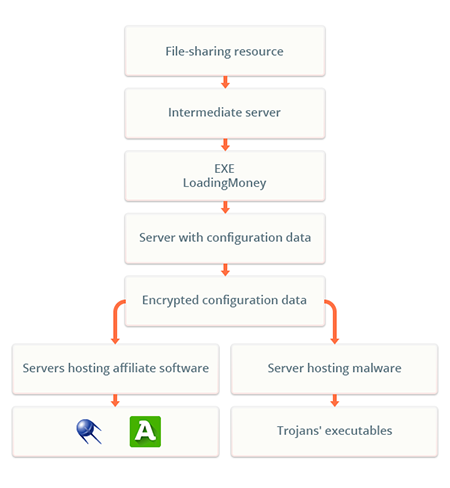 During August 2015, 834,753 URLs of non-recommended websites were added to Dr.Web database.

In comparison with the previous months, August proved to be rather calm in terms of mobile security events. However, Android devices continued to remain the main target of cybercriminals specializing in creation and distribution of mobile malware. For example, in August, Doctor Web security researchers detected a new Android Trojan designed for spying. Moreover, during the last summer month, new dangerous ransomware, banking Trojans, and SMS Trojans grew in number. Among the most noticeable events related to malware for Android we can mention