In August, Doctor Web security researchers detected and examined a new Android Trojan named Android.Backdoor.260.origin. This malicious program is distributed among Chinese users and is intended to spy on its victims. In particular, the Trojan can intercept SMS and QQ messages, steal contact list data, make audio records using the built-in microphone, track GPS coordinates of the infected device, and collect data entered by the user. 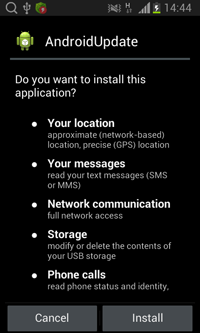 Android.Backdoor.260.origin has the following characteristics:

Find out more about the malicious application in this news article.

During the previous month, virus makers continued to distribute various Trojans designed to steal money from bank accounts of mobile devices' owners. Although the number of such attacks was not as large as before, many users still fell victim to them. Again, to distribute banking Trojans, cybercriminals employed spam campaigns involving short messages with malware download links.

In such manner, a Trojan under the name of Android.MulDrop.69.origin was distributed among Android users in South Korea. The malware installed Android.MulDrop.38 on mobile devices, and this program, in turn, installed a banking Trojan named Android.BankBot.74.origin.

In August, the number of ransomware Trojans belonging to the Android.Locker family grew significantly. These malicious programs lock mobile devices and demand a ransom to unlock them. During the previous month, Dr.Web virus database was updated with new entries for these Trojans: