In March, analysis of Dr.Web’s statistics revealed a 12.51% increase in the total number of threats compared to the previous month. The number of unique threats increased by 8.75%. Users were mostly threatened by malware browser extensions, unwanted programs and adware. Email traffic was still dominated by the Trojan.SpyBot.699 banking trojan and malware that exploits vulnerabilities in Microsoft Office programs.

In March, the number of user requests to decrypt files affected by encoders increased by 7.63% compared with February. Trojan.Encoder.26996 was the most active encoder, accounting for 32.60% of all incidents.

In March, Doctor Web virus analysts reported that certain websites, from blogs to corporate pages created using WordPress CMS, had been compromised. The JavaScript script embedded in the hacked pages code redirected visitors to a phishing site where they were prompted to install an important security update for the Chrome browser. The downloadable file was a malware installer that allowed attackers to remotely control the infected computers and deliver auxiliary malicious modules to them. 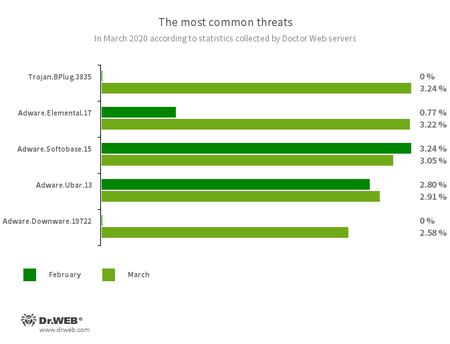 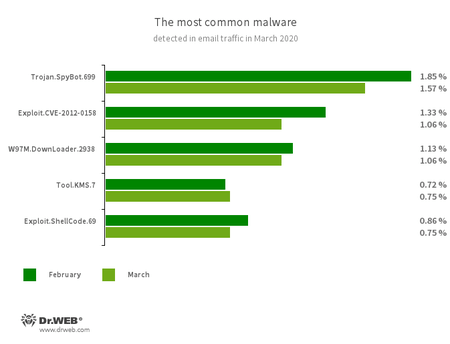 In March, Dr.Web’s statistics for Android devices confirmed an almost 21% increase in the total number of threats on protected devices compared to February. Doctor Web virus analysts uncovered new threats on the Google Play catalog. These include another modification of the Android.Joker family, which subscribe victims to paid services and download additional malicious components, and a new malware called Android.Circle.1. Controlled by the attackers, this trojan displayed ads and loaded websites, imitating users’ actions.