In terms of information security, May 2015 appeared to be rather uneventful. During the last spring month, no major instances of malicious mass mailings were detected. Botnets also kept a low profile.

Principal Trends In May

Existence of numerous installers of useless and unwanted applications is not news to Windows users. However, not so many programs of this kind target OS X. Due to this fact, security researchers took a great interest in an installer application that has been added to Dr.Web virus databases under the name of Adware.Mac.InstallCore.1. 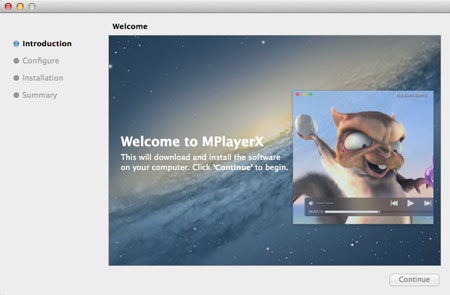 Consisting of several components, Adware.Mac.InstallCore.1 can not only install unwanted programs on the user’s computer but also change the browser home page and the search engine used by default. Moreover, this program encompasses debugging functions; that is, once it is launched, it scans the system for the presence of virtual machines, anti-viruses, or some other applications. If the scan returns positive results, the malware will not prompt the user to install additional programs. The following list presents some programs and utilities, which Adware.Mac.InstallCore.1 can install on the system:

Adware.Mac.InstallCore.1 is not the only adware for OS X examined in May 2015. For example, an application called WalletBee has been added to Dr.Web virus databases under the name of Adware.Mac.DealPly. This application serves the purpose of installing different extensions for Chrome and Safari.

Another adware for Apple computers, which was added to Dr.Web virus databases as Adware.Mac.WebHelper, unites WebTools and ShopMall applications. The malicious package contains several scripts for command interpreter SH, a set of Python scripts, and a few binary files.

Automatic launch of Adware.Mac.WebHelper is executed with the help of PLIST files. This application can modify the home page in Chrome, Firefox, and Safari. It can also change the default search engine to my-search-start.com. Adware.Mac.WebHelper contains a binary file that executes two AppleScripts (for Chrome and Safari) in infinite loop. These scripts inject a JavaScript code into web pages browsed by the user. Running of this code, in turn, results in downloading 4 other JavaScripts that display advertisements in the browser window.

One other program that encompasses the same functionality and targets OS X is called Mac.Trojan.Crossrider. Trojans belonging to the Crossrider family are well known to Windows users. However, this modification targets Apple computers. 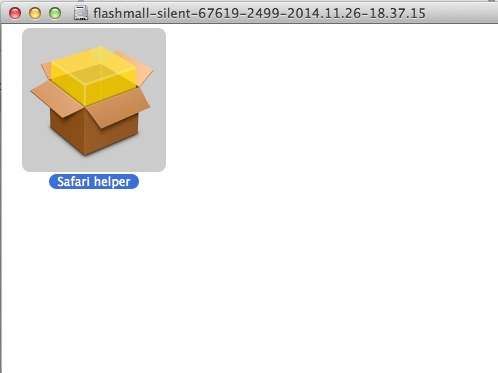 Mac.Trojan.Crossrider is distributed in the guise of an installation package (Safari Helper). Running of Mac.Trojan.Crossrider triggers a stealthy installation of the FlashMall extension for Safari, Chrome, and Firefox. Moreover, the malware adds two following applications to the system startup list: “WebSocketServerApp” and “Safari Security”. The first application is responsible for the communication with the command and control server and the second one installs browser extensions. Also, the malware modifies the startup scripts for the browser extensions to be updated in the future.

All adware programs and malicious applications for OS X detected by Doctor Web security researchers have been added to Dr.Web virus databases for OS X.

Find out more about malicious programs for OS X! 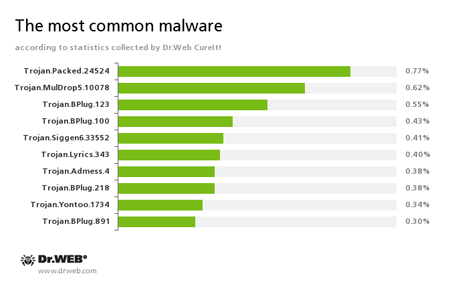 Doctor Web security researchers continue to monitor a number of active botnets. Among them is a botnet created by cybercriminals using the file infector Win32.Rmnet.12. The average daily activity of the botnet's two subnets is shown in the following graphs:

Rmnet is a family of viruses spread without any user intervention. They can embed content into loaded web pages (this theoretically allows cybercriminals to get access to the victim's bank account information), steal cookies and passwords stored by popular FTP clients, and execute other commands issued by cybercriminals.

The botnet consisting of computers infected with the Win32.Sector file virus is still active. This malicious program can:

In comparison with April 2015, cybercriminals intensified their attacks on Internet resources with the use of Linux.BackDoor.Gates.5. In May, the number of attacked IP addresses increased by more than 65.5 per cent and was estimated 5,498. Cybercriminals also changed the focus of their attacks. Thus, China became again the country leading in the number of compromised resources, while the United States were ranked second. 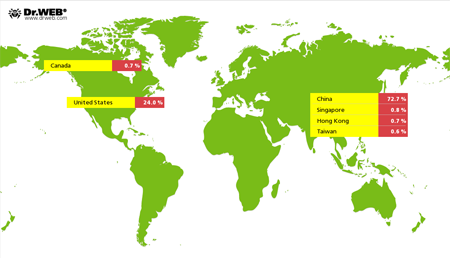 The most common ransomware programs in May 2015

In May 2015, Doctor Web security researchers examined a number of malicious programs that can infect computers with the Linux operating system. One of them was created by the Chinese hacker group called ChinaZ. The malware was named Linux.Kluh.1. Its main purpose is to infect routers running Linux. Similar to other programs written by ChinaZ, Linux.Kluh.1 serves the purpose of launching the following DDoS attacks: HTTP Flood (Linux.Kluh.1 can disguise itself as a Baidu crawler if a corresponding command is received from the command and control server), Spoofed SYN Flood, SYN Flood, and other DDoS attacks executed by sending mass requests to DNS servers. Among particular features of this Trojan one can mention the address of the Internet resource with the malware’s command and control server. 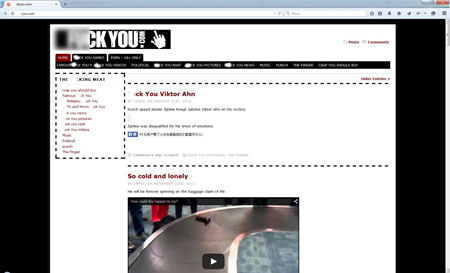 Another dangerous program targeting Linux acquired the name of Linux.Iframe.4. This is a malicious plug-in for the Apache web server that injects Iframe into web pages browsed by users redirecting the victim to the web page run by cybercriminals. To avoid false triggering, cybercriminals implemented into the Trojan’s architecture a function to check for the UserAgent parameter. This feature identifies the browser version and the victim’s IP.

Signatures of all malicious programs targeting Linux and detected in May have been added to Dr.Web virus databases for Linux.

In May, noticeable increase in activity on the part of cybercriminals who continue tricking Internet users into giving away their money was registered. To attract the potential victim’s attention, cybercriminals send bulk SMS messages with the text informing the recipient that they have won a car. All SMS messages contain a link to a web page that looks like an official Internet resource of some car dealer and provides detailed information regarding this “promotional campaign”. 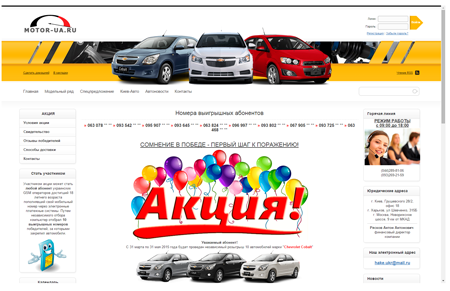 To collect the main prize, visitors of the fake site are asked to pay 1% of the car’s value in tax via a payment terminal or to purchase the MTPL insurance.

During May, a number of new malicious programs for Android were detected. Among the most noticeable events related to malware for Android we can mention