At the beginning of April, Doctor Web security researchers finished their examination of the dangerous multicomponent banking Trojan named Trojan.Dridex.49. This malware has a component that generates configuration required for the Trojan's functioning and launches the Trojan. It also includes the engine and additional modules. The Trojan's special feature is the use of a P2P protocol for establishing connection to the server.

Depending on the specified parameters, Trojan.Dridex.49 embeds itself in processes of Explorer (explorer.exe) or web browsers (chrome.exe, firefox.exe, iexplore.exe). All information transmitted between the server and the Trojan is encrypted. The Trojan can have one of the following roles on the infected computer:

In other words, the Trojan.Dridex.49 botnet uses the following scheme for message exchange: bot → node → admin node → other admin nodes → command and control server. For security reasons, the Trojans exchange keys. The entire interaction pattern of the botnet is as follows: 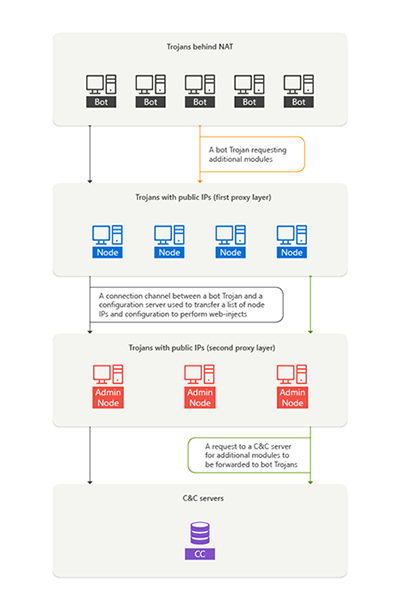 The main purpose of Trojan.Dridex.49 is web injection; that is, injecting arbitrary content into web pages viewed by customers of financial organizations.

The Trojan can collect confidential data entered in web forms, which allows cybercriminals to get access to victims' bank accounts and steal their money. Doctor Web's security researchers have learnt about more than 80 bank websites and other Internet resources, where the Trojan can steal confidential data; among them are well-known financial organizations such as Royal Bank of Scotland, TCB, Santander, Bank of Montreal, Bank of America, HSBC, Lloyds Bank, Barclays and many more. The signature of Trojan.Dridex.49 has been added to virus databases; so, Dr.Web users are protected from this malware.

In April, 73 149 430 malicious programs and riskware were detected. 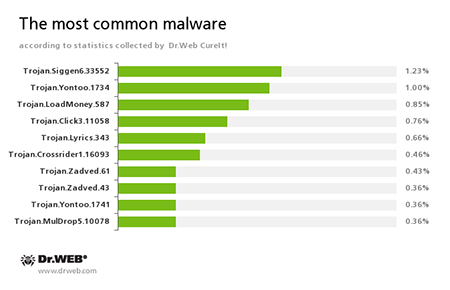 The botnet consisting of computers infected with the Win32.Sector file virus is still active. This malware can perform the following actions:

The number of Apple computers infected with the BackDoor.Flashback.39 Trojan remains almost the same and equals about 25 000:

In April, cybercriminals intensified their attacks on Internet resources with the use of Linux.BackDoor.Gates.5. In comparison with the previous month, the number of attacked IP addresses increased by more than 48 per cent and was estimated 3320. Curiously, most targets of the attacks were located in the USA, but previously the country leading in the number of compromised resources was China. The image below provides information about the geographic distribution of the attacks. 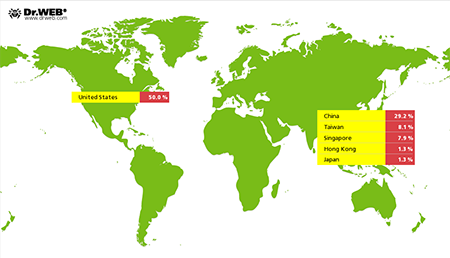 The most common ransomware programs in April 2015

In April, Doctor Web security researchers examined a new Trojan that can infect computers with Linux operating system — Linux.BackDoor.Sessox.1. Cybercriminals can control the backdoor by using the IRC (Internet Relay Chat) text-messaging protocol: the bot receives their commands from a chat running on the cybercriminals' server. To spread itself, the Trojan scans remote computers and searches for a vulnerability which allows starting a third-party script on an unprotected server. The script then installs a copy of the Trojan in the infected system.

The Trojan can launch an attack by sending repeating GET requests to the website specified by cybercriminals.

Another malicious program, named VBS.BackDoor.DuCk.1, was also examined in April. This malware can execute cybercriminals’ commands and send the remote server screenshots made on the infected computer. This backdoor is able to check the infected computer for virtual environment and anti-virus programs. News item about this dangerous Trojan was published on the Doctor Web's site.

In April, cybercriminals continued their attacks on users of Android devices. Thus, this month was rich in virus events. Among the most noticeable events related to malicious and unwanted programs for Android we can mention