Specialized software platforms that allow applications to launch other apps without installing them remain a relevant threat. Malicious actors are often using them in conjunction with the malware they distribute.

The Android.Spy.4498 trojan, which steals information from other apps’ notifications, continues to gradually lose ground against the most popular Android threats. Over the last month, its activity decreased by 29.05%, and it currently accounts for less than a third of all malware detections. 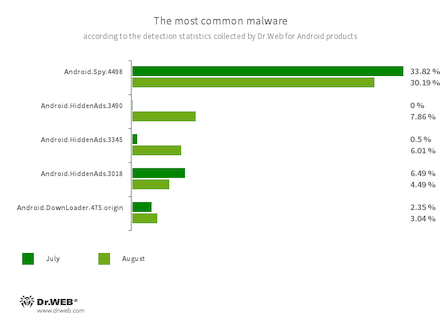 Android.Spy.4498
A trojan that steals the contents of other apps’ notifications. In addition, it can download apps and prompt users to install them, and it can also display various dialog boxes.
Android.HiddenAds.3490
Android.HiddenAds.3345
Android.HiddenAds.3018
Trojans designed to display intrusive ads. Trojans of this family are often distributed as popular and harmless applications. In some cases, other malware can install them in the system directory. When these trojans infect Android devices, they typically conceal their presence from the user. For example, they “hide” their icons from the home screen menu.
Android.DownLoader.475.origin
A trojan that downloads other malware and unwanted software. It can be hidden inside seemingly harmless apps found on Google Play or malicious websites. 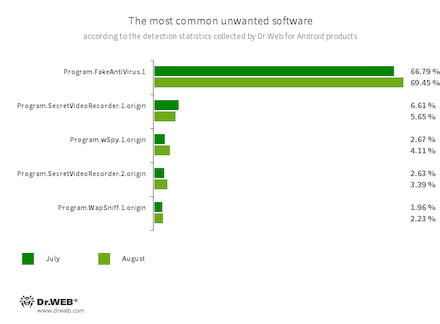 Program.FakeAntiVirus.1
The detection name for adware programs that imitate anti-virus software. These apps inform users of nonexistent threats, mislead them, and demand that they purchase the software’s full version.
Program.SecretVideoRecorder.1.origin
Program.SecretVideoRecorder.2.origin
The detection name for various modifications of an application that is designed to record videos and take photos in the background using built-in Android device cameras. It can operate covertly by allowing notifications about ongoing recordings to be disabled. It also allows an app’s icon and name to be replaced with fake ones. This functionality makes this software potentially dangerous.
Program.wSpy.1.origin
A commercial spyware app designed to covertly monitor Android device user activity. It allows intruders to read SMS and chats in popular messaging software, listen to the surroundings, track device location and browser history, gain access to a phonebook and contacts, photos and videos, and take screenshots and pictures through a device’s built-in camera. In addition, it has keylogger functionality.
Program.WapSniff.1.origin
An Android program designed to intercept WhatsApp messages. 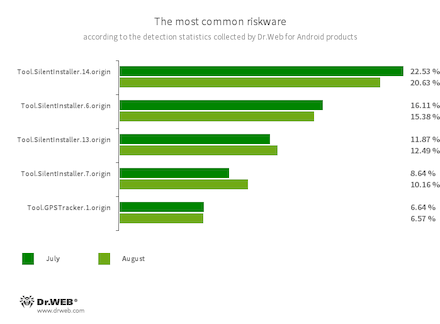 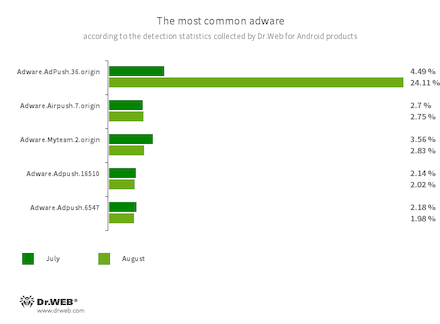