In March, the number of user requests to decrypt files affected by encoders increased by 13.2% compared to February. Trojan.Encoder.26996 was the most active, accounting for almost a quarter of all incidents. 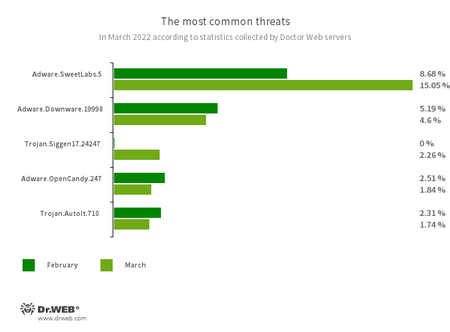 Adware.SweetLabs.5
An alternative App Store and Add-On for Windows GUI (graphical user interface) by the creators of the “OpenCandy" Adware.
Adware.Downware.19998
Adware that often serves as an intermediary installer of pirate software.
Trojan.Siggen17.24247
Trojan from the Siggen family.
Adware.OpenCandy.247
A family of applications that install other software on the system.
Trojan.AutoIt.710
A malicious utility program written in AutoIt language and distributed as part of a miner or RAT trojan. 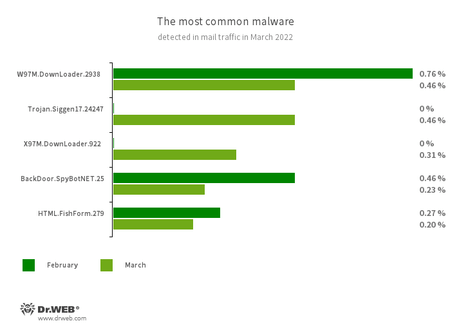 W97M.DownLoader.2938
X97M.DownLoader.922
A family of downloader trojans that exploit vulnerabilities in Microsoft Office documents. It can also download other malicious programs to a compromised computer.
Trojan.Siggen17.24247
Trojan from the Siggen family.
BackDoor.SpyBotNET.25
A backdoor written in VB.NET. It can operate with a file system (copy, create, delete catalogs, etc.), terminate processes, and take screenshots.
HTML.FishForm.279
A web page spread via phishing emails. It is a bogus authorization page that mimics well-known websites. The credentials that user sends on the page are sent to the attacker.

In March 2022, Doctor Web’s analysts’ attention was drawn to increased sites, that supposed to pay money for watching videos. It is assumed that the potential victim will end up on a site where the obligatory part of registration will be the input of bank card number. In fact, the cybercriminals will receive valuable data, and the victim will not be paid anything. 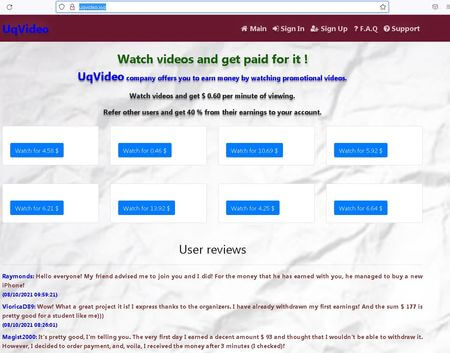 The snapshot shows an example of a website like this. Here are the prices for watching the video and the excited reviews from those who have already allegedly made money on it.

In March, Doctor Web warned users about CoinSteal trojans designed to steal cryptocurrencies from owners of Android and iOS devices. Attackers have embedded malicious applications into some versions of popular crypto wallets such as imToken, MetaMask, Bitpie and TokenPocket to distribute them as original ones. Trojans stole secret seed-phrases needed to access crypto wallets.

Besides that, our virus laboratory found another threats on Google Play. Among them were Android.FakeApp and a trojan called Android.PWS.Facebook.134. The former is used in various scam schemes. The latter is made for stealing confidential information required to access user Facebook accounts.

According to the detection statistics of Dr.Web anti-virus products for Android, in March, the Android.Spy.4498 trojan became the most common threat again. This trojan steals information from notifications from other applications. At the same time, its activity slightly decreased compared to the previous month. Withal, advertising trojans again showed high activity.