In February, the number of user requests to decrypt files affected by encoders decreased by 10.72% compared with January. Trojan.Encoder.26996 was the most active, accounting for almost a quarter of all incidents. 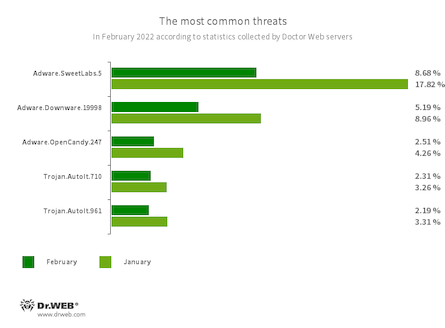 Adware.SweetLabs.5
An alternative App Store and Add-On for Windows GUI (graphical user interface) by the creators of Adware, like “OpenCandy".
Adware.Downware.19998
Adware that often serves as an intermediary installer of pirate software.
Adware.OpenCandy.247
A family of applications that install other software on the system.
Trojan.AutoIt.710
Trojan.AutoIt.961
A malicious utility program written in AutoIt language and distributed as part of a miner or RAT trojan. 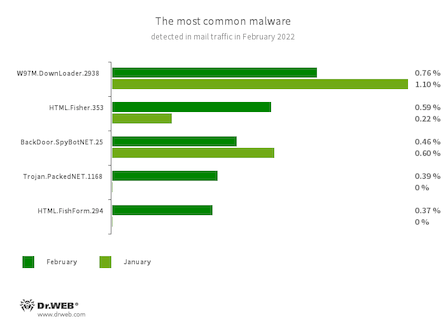 W97M.DownLoader.2938
A family of downloader trojans that exploit vulnerabilities in Microsoft Office documents. It can also download other malicious programs to a compromised computer. It’s designed to download more malware onto a compromised computer.
HTML.Fisher.353
An HTML phishing page that includes a form for filling in credentials to access an email account.
BackDoor.SpyBotNET.25
The emergence of a new backdoor written in Python A backdoor written in VB.NET. It can operate with a file system (copy, create, delete catalogs, etc.), terminate processes, and take screenshots.
Trojan.PackedNET.1168
Packed malware.
HTML.FishForm.294
A web page spread via phishing emails. It is a bogus authorization page that mimics well-known websites. The credentials a user enters on the page are sent to the attacker.

The snapshot shows an example of a website like this. Here are the fake departure numbers and payment status.

According to the detection statistics of Dr.Web anti-virus products for Android, in February, the Android.Spy.4498 trojan became the most common threat again. This trojan steals information from notifications from other applications. This malware accounted for 47.83% of detections. At the same time, advertising trojans again showed high activity.

Among the threats identified by Doctor Web specialists in the Google Play catalog are new fake programs from the Android.FakeApp family, multifunctional Android.Triada trojans, and yet another malicious program from the Android.Subscription, designed to subscribe users to paid mobile services.