In June, the number of user requests to decrypt files affected by encoders decreased by 8% compared with May. Trojan.Encoder.26996 was the most active, accounting for 37.65% of all incidents. 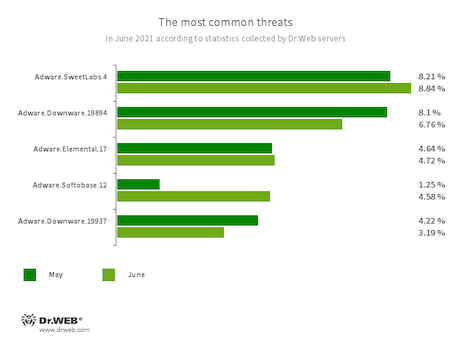 Adware.SweetLabs.4
Alternative app store and add-on for Windows GUI from the creators of Adware.Opencandy.
Adware.Downware.19894
Adware.Downware.19937
Adware that often serves as an intermediary installer of pirate software.
Adware.Elemental.17
Adware that spreads through file sharing services as a result of link spoofing. Instead of normal files, victims receive applications that display advertisements and install unwanted software.
Adware.Softobase.12
Installation adware that spreads outdated software and changes browser settings. 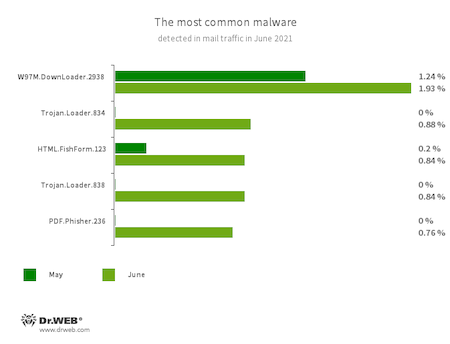 W97M.DownLoader.2938
A family of downloader trojans that exploits vulnerabilities in Microsoft Office documents and are designed to download other malicious programs onto compromised computers. It is designed to download other malware onto a compromised computer.
Trojan.Loader.834
Trojan.Loader.838
Packer components with different payloads.
HTML.FishForm.123
The web page spread via phishing emails. It is a bogus authorization page that mimics well-known websites. The credentials a user enters on the page is sent to the attacker.
PDF.Phisher.236
A PDF document used in phishing newsletters.

User requests to decrypt files affected by encoders decreased by almost 8% compared to May. 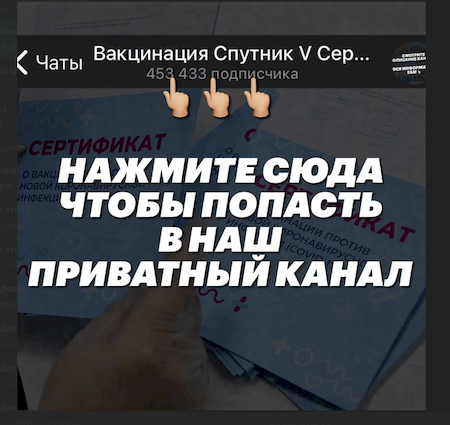 The screenshot shows an example of a QR code trading scheme. Sales happens in private channels, which can be accessed only after joining the special chat. They publish enthusiastic customer reviews and promise a 100% guarantee of entry into any restaurant.

According to the detection statistics, Dr.Web anti-virus products for Android detected various trojans designed to display advertisements most often in June. Besides that, malicious applications that can execute arbitrary code and load other software remained among the most common threats.