In March, analysis of Dr.Web’s statistics revealed a 16.72% increase in the total number of threats compared to the previous month. The number of unique threats also increased by 19.49%. Adware and unwanted software still occupy the top spot for detected threats. Various malware that includes obfuscated trojans, malicious scripts, and programs exploiting vulnerabilities in Microsoft Office utilities were the most frequently detected threats in email traffic.

In March, the number of user requests to decrypt files affected by encoders increased by 11.33% compared with February. Trojan.Encoder.567 was the most active, accounting for 23.76% of all incidents. 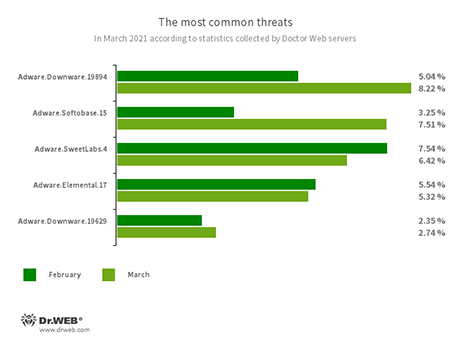 Adware.Downware.19894
Adware.Downware.19629
Adware that often serves as an intermediary installer of pirate software.
Adware.Softobase.15
Installation adware that spreads outdated software and changes browser settings.
Adware.SweetLabs.4
An alternative app store and add-on for Windows GUI from the creators of Adware.Opencandy.
Adware.Elemental.17
Adware that spreads through file sharing services as a result of link spoofing. Instead of normal files, victims receive applications that display advertisements and install unwanted software. 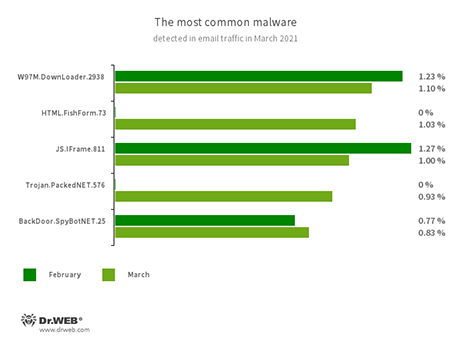 W97M.DownLoader.2938
A family of downloader trojans that exploits vulnerabilities in Microsoft Office documents and can download other malicious programs onto a compromised computer.
HTML.FishForm.73
The web page spread via phishing emails. It is a bogus authorization page that mimics well-known websites. The credentials a user enters on the page is sent to the attacker.
JS.IFrame.811
A malicious script embedded into web pages. The script’s execution allows one to redirect visitors to the unwanted and dangerous websites, display annoying ads in the browser, or track user actions.
Trojan.PackedNET.576
Packed malware written in VB.NET.
BackDoor.SpyBotNET.25
A backdoor written in VB.NET and designed to operate with a file system (to copy, create, delete catalogs, etc.), terminate processes, and take screenshots.

During March 2021, Doctor Web Internet analysts added numerous fraudulent and malicious resources to the Dr.Web database of non-recommended websites. In March, the fraudsters continued to actively distribute websites with fake lotteries and giveaways. To receive an apparent prize, the victim was most likely prompted to pay a commission under various pretexts. 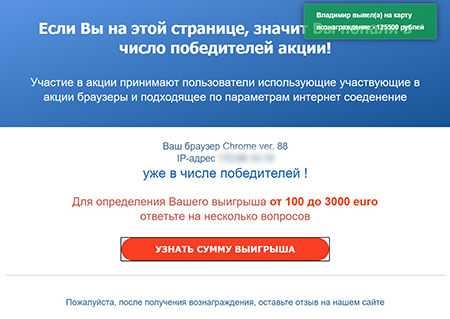 This is a snapshot of the fraudulent website with a fake giveaway. It displays the visitor's IP address along with the browser used and announces the lottery win. It then invites the user to find out the winning amount by answering several questions.

All these websites had similar looks: sections with fake reviews, pop-up windows with the "winners", a bogus chat with technical support, etc. Using common methods of social engineering, fraudsters pushed users into disclosing bank card data and paying a commission.

In March, malware that is able to download and execute arbitrary code, as well as trojans that showed ads were again among the most common mobile threats. In addition, users often faced unwanted advertising software.