In January, Dr.Web server statistics revealed an increase in the total number of threats by 0.53% compared with the previous month. The number of unique threats dropped by 5.06%. Malicious browser extensions and adware prevailed among malware and unwanted programs. E-mail traffic was still dominated by malware that exploits vulnerabilities found in Microsoft Office programs. With that, we saw a two-fold increase in the number of banking trojan detections — Trojan.SpyBot.699.

January also showed a downward trend in encoder activity. The number of user requests to decrypt infected files decreased by 24.02% as compared with December. Trojan.Encoder.26996 was the most active encoder, accounting for 18.48% of all incidents. 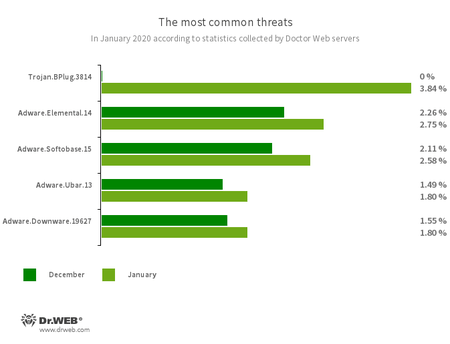 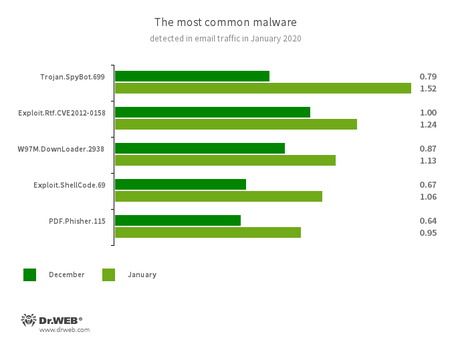 Trojan.SpyBot.699
A multi-module banking trojan. It allows cybercriminals to download and launch various applications on an infected device and run arbitrary code.
Exploit.CVE-2012-0158
A modified Microsoft Office document that exploits the CVE-2012-0158 vulnerability in order to run malicious code.
W97M.DownLoader.2938
A family of downloader trojans that exploit vulnerabilities in Microsoft Office applications. Designed to download other malware onto a compromised computer.
Exploit.ShellCode.69
A malicious Microsoft Office Word document that exploits the CVE-2017-11882 vulnerability.
PDF.Phisher.115
A PDF document used in phishing newsletters.

During January 2020, 97,166 URLs of non-recommended websites were added to the Dr.Web database.

In January, the total number of detected threats on Android devices decreased by almost 13% compared to the previous month. At the same time, spyware and downloader trojans remain active.