In October, Dr.Web server statistics showed an increase in the total number of threats compared to September. The number of unique threats dropped by 6.86%. The most common threat in email traffic was malware that exploits vulnerabilities in Microsoft Office documents, as well as phishing newsletters. A password stealing trojan topped the list of detected malware and unwanted software, but adware still makes up the majority of all threats. 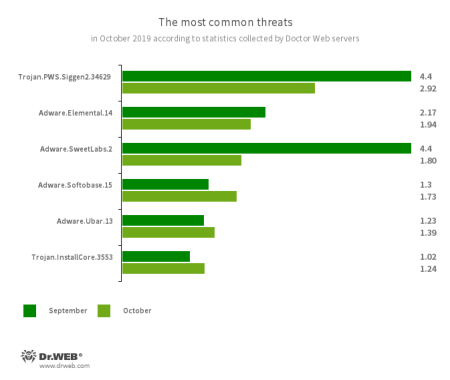 Trojan.PWS.Siggen2.34629
A trojan designed to steal passwords.
Adware.Elemental.14
Detects adware downloaded from file sharing services because of link spoofing. Instead of normal files, victims get applications that display advertising as well as install unwanted software.
Adware.SweetLabs.2
Alternative app store and add-on for Windows GUI from the creators of Adware.Opencandy.
Adware.Softobase.15
An installer that distributes outdated software. It changes browser settings.
Adware.Ubar.13
A torrent client that installs unwanted software on devices.
Trojan.InstallCore.3553
Another notorious adware installer. It displays ad banners and installs software without users’ permission. 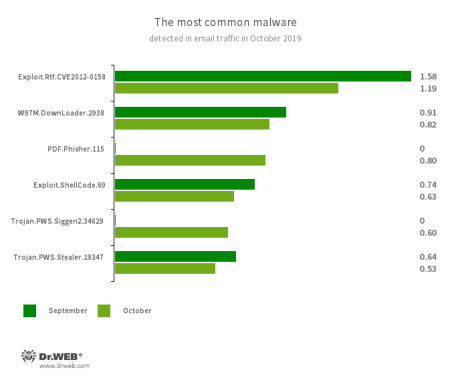 In October 2019, the database of non-recommended and malicious websites was updated with 254,849 webpages.

Last month, Doctor Web virus analysts revealed a number of threats on Google Play. They included clicker trojans from the Android.Clickfamily that subscribed users to premium services. Cybercriminals also distributed the Android.HiddenAds trojan adware and the Android.SmsSpy, malware that hooked incoming text messages. In October, our experts detected new modifications to the Android.Joker trojan family. They were able to execute arbitrary code at cybercriminals’ command and clandestinely subscribe victims to costly mobile services.

The most noticeable October event related to mobile malware: