In August, Dr.Web server statistics detected a 21.28% decrease in the total number of threats compared to July. The number of unique threats dropped only slightly by 2.82%. The most common threat in email traffic is malware that exploits vulnerabilities in Microsoft Office documents, as well as trojan downloaders. Similarly to the previous month, the majority of detected malware and unwanted software is adware.

In August, researchers at Doctor Web’s virus lab discovered a dangerous banking trojan spread by cybercriminals via fake websites of popular software. One of these resources is copied from a well-known VPN service, while others are disguised as corporate office software websites. 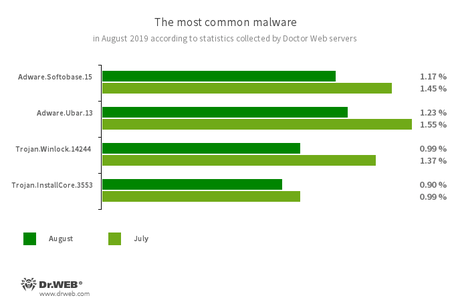 Adware.Softobase.15
Installation adware that spreads outdated software and changes the browser’s settings.
Adware.Ubar.13
A torrent client designed to install unwanted programs on a user’s device.
Trojan.Winlock.14244
A ransomware trojan that blocks or limits a user’s access to the Windows operating system and its functionalities. In order to unlock the system, a user must transfer money to the cybercriminals.
Trojan.InstallCore.3553
Another well-known adware installer. It displays ads and installs new software without a user’s permission. 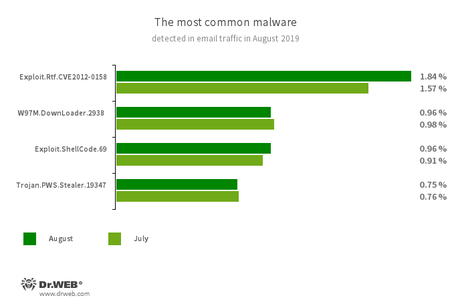 In August 2019, Doctor Web added 204,551 URLs to the Dr.Web database of non-recommended websites.

In August, Doctor Web experts discovered several new malware on Google Play. In early August, the Dr.Web virus database was updated to detect the Android.Click.312.origin trojan, which could open links and various websites following the command of the server. Virus analysts also detected new adware Android.HiddenAds, as well as the Android.DownLoader.915.origin downloader that was able to download other malicious applications.

At the end of the month, Doctor Web experts discovered another banking trojan that attacked users from Brazil. The malware, dubbed Android.Banker.346.origin, exploited the Android OS Accessibility Service and could hook text messages.