In May, Dr.Web’s statistics registered a 1.49% increase in the number of unique threats compared to April; while the number of all detected threats increased by 14.51%. Malware and unwanted programs statistics show the prevalence of adware and installers. E-mail traffic is still dominated by malware that uses the vulnerabilities of Microsoft Office programs, but in May we also registered an increase in the spread of the dangerous trojan, Trojan.Fbng.8 (FormBook).

In May, Doctor Web’s researchers warned about unique malware for the macOS operating system–Mac.BackDoor.Siggen.20. It allows attackers to download and execute malicious python code on the victim’s device. Additionally, websites that spread the malware also infect their visitors with a Windows spyware trojan, BackDoor.Wirenet.517 (NetWire). The latter is a well-known RAT trojan used by hackers for controlling a victim’s PC remotely. It has several malicious functions, including using the camera and microphone on the victim’s device. The RAT trojan also has a valid digital signature. 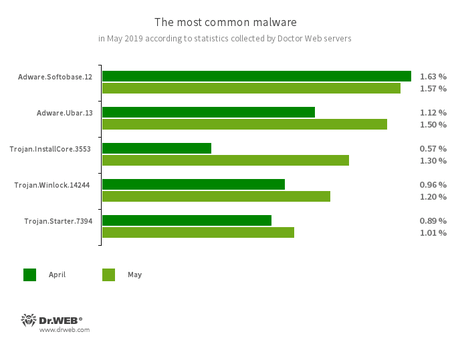 Adware.Softobase.12
Installation adware that spreads outdated software and changes the browser’s settings.
Adware.Ubar.13
A torrent client designed to install unwanted programs on a user’s device.
Trojan.InstallCore.3553
Another well-known adware installer. It shows ads and installs additional programs without the user’s permission.
Trojan.Winlock.14244
A ransomware trojan that blocks or limits a user’s access to the Windows operating system and its functionalities. In order to unlock the system, a user must transfer money to the cybercriminals.
Trojan.Starter.7394
A trojan designed to launch other malicious software on a victim’s device. 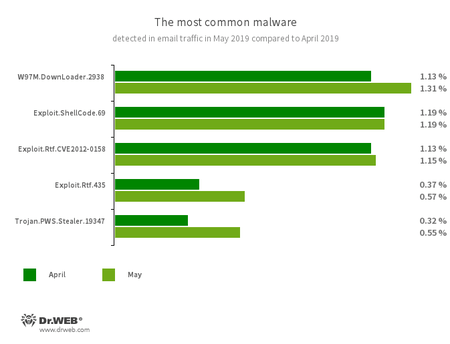 In May, victims of the following encryption ransomware most frequently contacted Doctor Web’s technical support service:

In May, malware developers again distributed various malicious programs through the Google Play service. Researchers at Doctor Web discovered a trojan, Android.HiddenAds.1396, which showed advertising banners and blocked the interface of other apps and the operating system. Later the same month, the researchers discovered Android.SmsSpy.10206 and Android.SmsSpy.10263 spyware trojans, which were used to steal incoming SMS and send them to the malware developers.

The most noticeable May event related to mobile malware: