Usually, in the middle of summer, major information security events are rare. However, July 2017 is an exception. At the beginning of the month, Doctor Web’s specialists detected a backdoor in the electronic document management application called M.E.Doc. Later, security researchers have determined the distribution source of BackDoor.Dande that stole medication procurement information from pharmaceutical companies. In the end of the month, the Government Services Portal of the Russian Federation (gosuslugi.ru) was found to be compromised. Also, in July, several dangerous malicious programs for Android have been detected.

M.E.Doc is the electronic document management application popular in Ukraine. It was developed by Intellect Service. Doctor Web security researchers found that one of the M.E.Doc components, ZvitPublishedObjects.Server.MeCom, contained a record corresponding to a specific Windows system registry key: HKCU\SOFTWARE\WC. 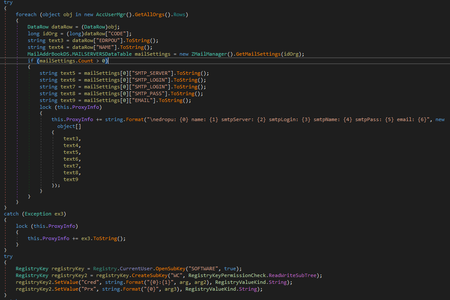 Trojan.Encoder.12703 uses the same registry key for its operation. Security researchers examined the Dr.Web Anti-virus log obtained from one of our customer’s computers and found out that the encoder was launched on the infected machine by the application ProgramData\Medoc\Medoc\ezvit.exe, which is a component of M.E.Doc:

Further research of the program showed that one of its libraries—ZvitPublishedObjects.dll—contains a backdoor that can execute the following functions:

Besides, the M.E.Doc update module allows the payload to be launched using the tool rundll32.exe with the parameter #1—it is the way Trojan.Encoder.12544 was launched on infected computers. For more information, refer to this article published on our website.

In the middle of July, Doctor Web specialists have detected potentially malicious, injected code in the Government Services Portal of the Russian Federation (gosuslugi.ru). There were at least 15 domain addresses registered by an unknown individual, at least 5 of them belong to Dutch companies. The malicious code forced the browser of any visitor to the website to covertly connect to one of them. While a website page requested by a user is being generated dynamically, the container <iframe> is added to the website code. It allows any external data to be downloaded or requested from the user’s browser. All vulnerabilities of the gosuslugi.ru website were eliminated by its administration a few hours after our news article on that matter was published.

In 2011, Doctor Web reported on detection of BackDoor.Dande which spied on pharmaceutical companies and drugstores. Security researchers have examined the hard drive provided by one of the affected companies and determined that an ePrica component was downloading and launching the Trojan onto targeted systems. Drugstore managers use this software component to analyze drug prices and choose the best suppliers. This module downloaded the BackDoor.Dande installer from a server belonging to “Spargo Tekhnologii”, and this installer then launched the backdoor on attacked computers. In addition, the indicated module had the digital signature “Spargo”.

Analysis performed by Doctor Web showed that the BackDoor.Dande components were embedded directly into one of the earlier versions of the ePrica installer. Among the Trojan’s modules there are the backdoor installer and modules used to collect medication procurement information. These modules obtain the needed data from the databases of drugstore programs. One of the modules was used to copy pharmaceutical product procurement information from 1C databases. It is important to note that even after ePrica is removed, the backdoor stays in the system and continues to spy on users. Details of the research conducted by Doctor Web on the ePrica software are published on our website.

At the beginning of the month, Doctor Web specialists detected Android.DownLoader.558.origin in a popular game called BlazBlue which is available on Google Play. This malicious program could covertly download and launch unchecked application components. Later security researchers examined a dangerous Trojan dubbed Android.BankBot.211.origin. It could control infected mobile devices, steal confidential banking information and other secret data, including passwords. In the end of July, Doctor Web security researchers detected Android.Triada.231. Cybercriminals injected it into an Android system library and inserted it into a firmware of several mobile device models. This malicious program infiltrated processes of all executed programs and covertly launched Trojan modules.