April proved to be quite busy in terms of information security events. At the beginning of the month, cybercriminals arranged for a malicious mailing that was used to spread a multi-component Trojan. It is designed to steal confidential information from infected computers. In mid-April, Doctor Web’s specialists examined a fraudulent scheme involving a malicious program being used by cybercriminals to trick users. At the end of the month, a vulnerability in Microsoft Office was detected; it was used to spread a Trojan that steals passwords from infected computers.

A multi-component Trojan, dubbed Trojan.MulDrop7.24844, was spread as an archived email attachment.

This archive contains a packed container that was created using the capabilities of the Autoit language. One of the components launched by Trojan.MulDrop7.24844 on infected computers is an application for remote administration. Dr.Web Anti-virus detects it as Program.RemoteAdmin.753. In addition, the Trojan saves two other applications on a disk. These programs are 32-bit and 64-bit versions of the Mimikatz tool. It is designed to intercept the passwords of open Windows sessions. Trojan.MulDrop7.24844 activates a keylogger that records to the file any information about the keys pressed by a user. It also performs several other functions defined by a parameter that is set at the moment of launch. The Trojan gives criminals access via RDP (Remote Desktop Protocol), allowing them to control the infected computer. More information about this malicious program can be found in the corresponding review published by Doctor Web.

During April 2017, Doctor Web added 568,903 URLs into the Dr.Web database of non-recommended sites.

In mid-April, Doctor Web described a fraudulent scheme that has been used for some time by cybercriminals who are engaged in “fixing matches”. 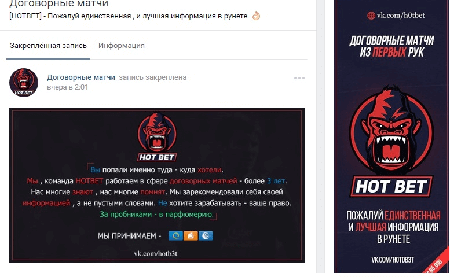 Usually cybercriminals sell unreliable information about the results of upcoming sports events. This information is supposed to be used for sure-win bets at bookmaker's offices. Now cybercriminals are offering their potential victims the opportunity to download a password-protected, self-unpacking RAR archive that supposedly contains a text file with the match results of an event. Cybercriminals send the password for this archive after the match is finished—that way the victim can be sure the forecast is valid. However, instead of the archive, the cybercriminals send their victims their own program, one that fully imitates the interface and behaviour of an SFX archive created with WinRAR. This fake “archive” contains the template of a text file that, with the help of a special algorithm, inserts the required match results which depend on what password is entered by the user. This program has been added to the Dr.Web virus databases under the name Trojan.Fraudster.2986, and the websites that have distributed it have been added to the list of non-recommended websites.

At the end of April, a malicious program dubbed Trojan.DownLoader23.60762 was being distributed. It is designed to steal passwords from popular browsers and download different files without authorization. On the computer it has infected, the Trojan injects itself in browsers and intercepts the functions responsible for working with the network. It can execute the following commands:

More information about this malicious program can be found in the review published by Doctor Web.

Also in April, a vulnerability was found in the Microsoft Office Word text editor. Cybercriminals created the exploit Exploit.Ole2link.1 to take advantage of this vulnerability. This exploit is implemented as a Microsoft Word document with the DOCX extension. Once this document is opened, another file called doc.doc is loaded. It contains an embedded HTA script, detected by Dr.Web as PowerShell.DownLoader.72. This HTA script, written using Windows Script syntax, calls the command interpreter PowerShell. PowerShell processes another malicious script that downloads an executable file to the attacked computer. For more information regarding this vulnerability, refer to the following article.

During the course of April, Doctor Web’s specialists registered 1,317,388 attacks on different Linux devices—147,401 of them were performed over the SSH protocol and 1,169,987 of them over the Telnet protocol. The below diagram shows the proportional relationship between the most frequently detected Linux Trojans: 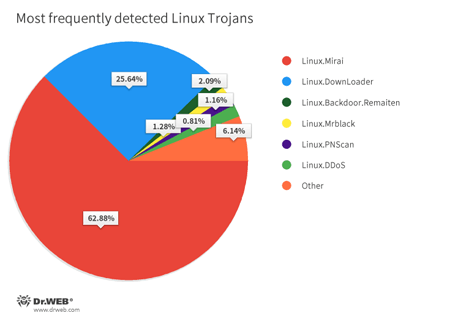 In April Doctor Web’s specialists examined an updated version of a malicious program from the Linux.UbntFM family. The program was dubbed Linux.UbntFM.2. Cybercriminals developed this Trojan for Linux operating systems, including Air OS, which Ubiquiti Networks produces and installs on its devices. It is implemented as bash scripts distributed in the archive tgz.

Linux.UbntFM.2 creates new accounts on the infected device and downloads and launches arbitrary files. Moreover, the Trojan can attack remote devices using a vulnerability in the web interface of Air OS, which allows it to download an arbitrary file through an arbitrary path without authorization. If the Trojan cannot define the protocol (or Air OS is not installed on the infected device), it can attempt to generate account details for the SSH connection using a special dictionary and the logins “root”, “admin”, and “ubnt” and the passwords stored in the “passlst” file. Details on this malicious program’s operating routines can be found in the technical description.

In addition, in April, a new version of a Trojan from the Fgt family was detected — Linux.BackDoor.Fgt.645. This modification of a malware program is distinguished from the previous one by a limited range of functions (only the module for cracking passwords to hack into remote network servers and the dropper remain); the new version can also send a request to download and launch an .sh script.

In April, the new spy Trojan Android.Chrysaor.1.origin was added to the Dr.Web virus database. Cybercriminals could use it for targeted attacks to steal confidential information from Android device users. In April, several new banking Trojans were detected on Google Play. One of them was given the name Android.BankBot.179.origin. It was distributed in the guise of programs that offer online videos, and in reality the programs actually did just that. Another Android banking Trojan found on Google Play was added to the virus database as Android.BankBot.180.origin. This Trojan presented itself as a flashlight program.