July 2015 witnessed a surge of activity on the part of virus makers specializing in malicious programs for Linux OSes. Moreover, cybercriminals could not leave Windows unattended either—entries for new Trojans targeting this operating system were added to Dr.Web virus databases. Creators of malware for Android devices were also as active as ever—in July, Doctor Web security researchers detected a number of Trojans targeting this popular mobile platform; one of suchlike programs has already been downloaded more than 1.5 million times. 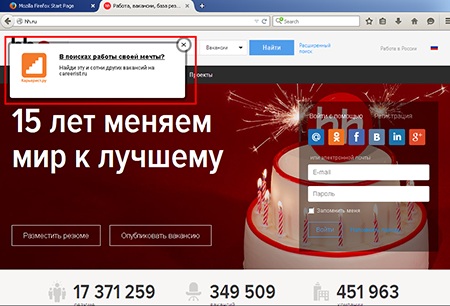 Trojan.Ormes.186 is implemented as an add-on for Mozilla Firefox, Chrome, and Opera and is distributed by means of droppers. The Trojan has a list of about 200 website addresses hard-coded in his body. On these Internet resources, among which are popular search engines, job boards, and social networking websites, Trojan.Ormes.186 performs web injections.

Moreover, the malicious program can imitate mouse clicks of Megafon (“Мегафон”) and Beeline (“Билайн”) clients to confirm various subscriptions. One can easily see that this Trojan has a rather complicated structure that allows it to perform a number of different actions, including the following ones:

In July, the numerous botnets whose activities are being closely monitored by Doctor Web security researchers continued to remain operational. Among them is the botnet created by cybercriminals using the Win32.Rmnet.12 file infector. The average activity of the botnet's two subnets is shown in the following graphs:

The botnet consisting of computers infected with Win32.Sector is still active, and its average daily activity can be seen in the following picture. The malicious program can perform the following actions:

In comparison with the previous month, attacks on Internet resources with the use of Linux.BackDoor.Gates.5 became even less frequent. Thus, the number of attacked IP addresses decreased by 25.7 per cent and was estimated 954. Cybercriminals also considerably narrowed focus of their attacks—74.8 per cent of compromised resources were located in China, while 20.4 per cent of targeted websites were hosted in the United States.

The most common ransomware programs in July 2015

Its creators planned to equip the program with a large number of various features. However, at the moment, the malicious application ignores the majority of incoming commands. In fact, the Trojan can execute only the following commands: launch a DDoS attack, start a SOCKS proxy server, run a specified application, reboot the computer or turn it off. Moreover, virus makers attempted to make a cross-platform program out of their creation; so that the executable file could be assembled both for Linux and Windows architectures. Find out more about this malicious program in the news article published by Doctor Web.

The previous month proved to be rather rich in terms of mobile security events—in July, new malicious programs for Android continued to appear, and users of mobile devices continued to fall victim to cybercriminals' attacks. In particular, at the end of the month, Doctor Web security researchers detected a Trojan named Android.DownLoader.171.origin that was distributed through Google Play. This malicious program has already been downloaded by about 1.5 million users. The Trojan can not only install but also remove programs without user knowledge. In addition to that, the Trojan can display fake email message notifications in the status bar. If the user taps such a notification, a website specified by cybercriminals will be loaded in the browser window. Find out more about the malware in this news article.