In the last month of 2016, Doctor Web’s specialists detected an Android Trojan that could infect the system libraries of devices. They also found a Trojan for Windows that is designed to install unwanted applications. And, later in the month, they discovered several Android Trojans in the firmware of many popular mobile devices.

Many modern Trojans download and install various applications on a computer without the user’s knowledge: virus makers use the services of affiliate programs to get paid for every download. These Trojans are usually very simple, unlike Trojan.Ticno.1537. Once launched, it tries to detect the presence of the virtual environment and debugging tools and starts operating only if it has not found anything suspicious. The Trojan saves a file named 1.zip on the disk and opens a dialog similar to the Microsoft Windows “Save” window: 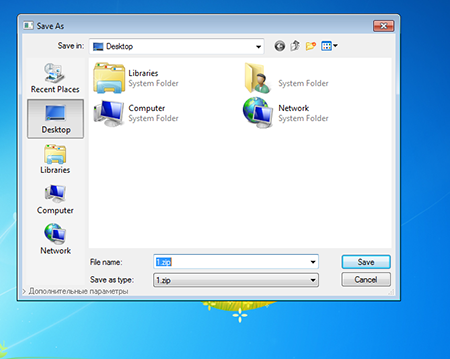 The link “Additional parameters” is in the bottom-left corner. Once it is clicked, Trojan.Ticno.1537 shows the list of programs it is going to install. Among them are the Amigo browser, the application HomeSearch@Mail.ru, and the Trojans Trojan.ChromePatch.1, Trojan.Ticno.1548, Trojan.BPlug.1590, Trojan.Triosir.718, Trojan.Clickmein.1 and Adware.Plugin.1400. For more information about Trojan.Ticno.1537, refer to this news article.

During December 2016, 226,744 URLs of non-recommended websites were added to Dr.Web database.

In December, Doctor Web’s security researchers found Android.Loki.16.origin which was infecting Android system libraries, injecting itself into application processes, and covertly installing other programs. In addition, December was marked by the emergence of Android.DownLoader.473.origin and Android.Sprovider.7 which were preinstalled on dozens of models of Android devices. These Trojans also downloaded and installed unwanted applications.

Among the most noticeable December events related to mobile malware we can mention: