First epidemic in 2010 and other virus events of January

The wide spreading of a variety of Trojan.Winlock programs became the most noticeable event of January. In a compromised system this malicious program displays its own window on top of all other windows and won't close it unless an unlock code is entered. It also disrupts operation of some programs installed on the machine. Criminals offer a victim to retrieve an unlock code by means of a paid SMS. In January the SMS charge varied between EURO 7-14 per each computer. 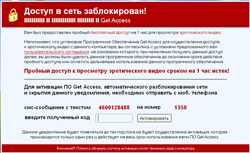 The statistics server of Doctor Web registered over 850 000 instances of detection of Trojan.Winlock in systems protected by Dr.Web software (Dr.Web Enterprise Suite and Dr.Web anti-virus service included). This figure is 2.15 times larger than the number registered in December 2009 and 23.4 higher than in November 2009 thus indicating the ongoing epidemics in Russia and Ukraine. In the last month several millions of users got infected by this malicious program. 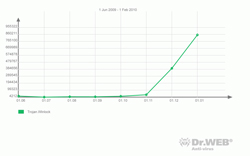 The epidemic caused a stir in the Russian-speaking internet community with providers of short numbers offering unlocking codes free of charge and anti-virus vendors supplying users with free tools to counter Trojan.Winlock programs.

On January 22 Doctor Web set up a special web-page for generation of unlocking codes (over one million visits to the page were registered in a week). Doctor Web also released several versions of Dr.Web CureIt! designed specifically to neutralize such Trojans.

Easy monetizing of profits generated by paid SMS served as a good incentive for many cyber criminals. Along with blockers of Windows numerous web-sites were created to promote non-existing services and software with incredible features. 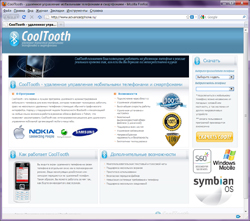 Typically users paid for such services and software with short messages. However, as telecom operators and police started to monitor SMS payment systems closely in the face of the winlock epidemic, using such systems has become troublesome for criminals. That’s why they reintroduced means of payments they used before (e.g. WebMoney) and invented new fraud schemes.

Another scheme that has been gaining popularity among fraudsters in January allows criminals to withdraw funds from accounts of users of mobile phones. Users enter their phone numbers on a web-site that promoted a service and receive short messages with a link for activation of their subscriptions. Once activated, the service charge is withdrawn from an account automatically.

The malicious design allows a person to submit someone else's number on the web-site while messages with an activation link don't explain to a user what the service is about, instead, they provide misleading information to encourage the user to click on the link even if he doesn’t mean to subscribe for a service. For example, a message can say that the link will lead the user to an image or a video clip.

In recent weeks criminals have also offered users to pay for services with a paid call that has a minimum duration limit.

Below you can find a few tips that may help you prevent infection of your system by Trojan.Winlock programs or by other similar pieces of malware

If a window with a message demanding to send an SMS at a short number is displayed on top of other windows, won’t close and appears even when the system is started in the safe mode, your system has been infected by one of the modifications of Trojan.Winlock.

The number of malicious programs in e-mail traffic in January decreased by 30% compared with December 2009. The share of malicious files in the total number of files scanned on user machines dropped by 35%. Most probably this decline is a correction following two times increase of malicious traffic among scanned objects.