Neutralization of TDL3 and other virus events of November

On November 12 2009 Doctor Web offered to its customers a new version of the scanner that became the first anti-virus that could be launched in an infected system and neutralize BackDoor.Tdss.565 (also known as TDL3).

Rootkits of this type incorporate latest evasion technologies that allow them to bypass virtually all existing anti-viruses, inject malicious code into system processes and yet remain undetected.

One of such innovates of BackDoor.Tdss.565 is its new installation method that allows the malware to avoid detection by virtually all known behaviour analyzers thus showing that virus makers not only try to make new pieces of malicious code hard to detect for signature-based scanners and heuristic analyzers but also make attempts to evade (and sometimes they succeed) behaviour analyzers.

A hidden virtual drive created by the rootkit on a hard disk in the compromised system became another novelty introduced by virus makers. The hidden virtual disk stores files required for operation of the Trojan. A special mounting algorithm allows hiding this additional device in the system.

The rootkit also infects one of the drivers responsible for operation of hard drives. The malware detects which hard drive interface is used in the system and injects its code into a corresponding driver.

BackDoor.Tdss.565 also takes advantage of other non-standard techniques that make its detection and neutralization quite a challenge for anti-virus vendors. Dr.Web developers were the first ones who solved the problem and results of their work have been implemented in the latest version of the Dr.Web scanner included in all Doctor Web’s solutions for Windows.

In its monthly renews and numerous news reports Doctor Web warned users against downloading fake anti-virus software which can still be found in large numbers on the Internet.

However, software for mobile devices also becomes a popular disguise for malware. It is hardly surprising since mobile phones have become an indispensable part of our lives. In recent months cyber criminals that exploited the wide interest of users to such software haven't used malware in their fraud schemes. But in November Russian users were "offered” password stealers as software tracking mobile phone users.

It may rain in the Dance City

It is well known that many users spend significant amounts of money to access exclusive content or special features in online games thus bringing income to their authors and publishers. Surely cyber criminals want to have their share too and exploit users’ interest in gaming to distribute malware.

This review describes several fraud schemes targeting Russian users of the MORPG Parapa: the Dance City. Popularity of this game in Russia is growing and players adopt various techniques (sometimes unfair) to gain a certain advantage in the game or receive a special bonus. A user can progress through the game by gaining points but this way is long and tiresome. Another way to reach a higher level is to place a certain amount of money on a virtual account in the game.

Cyber-criminals offered users software that would supposedly be adding a certain amount on their virtual game accounts on a daily basis, give users administrative privileges or help acquire other qualities that could give one an advantage in the virtual dance city.

As a matter of fact users falling for such schemes not only risk to spend their money in vain. It is not uncommon when an intruder acquires the user account information along with the gcharacter that has been in the game for several months. Such a character often goes on sale. To receive money from a victim criminals often resort to such services as files4money.com, files4sms.com, mix-file.com. 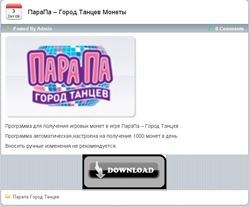 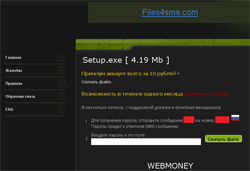 Apart from extracting money from victims malefactors could also provide users with free software for “cracking’ the game. As a rule, such cracks disguise malicious programs such as BackDoor.Dax.47. 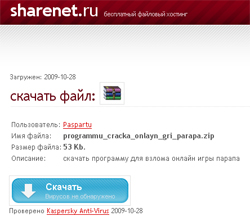 New modifications of password stealers Trojan.PWS.Panda and new variations of Trojan.Proxy that were spread via e-mail in previous months were also found in messages in November. But since anti-virus vendors inform users about such mailings on a regular basis, virus makers had to find new ways to lure users into downloading and launching malicious executable files.

In previous months such messages were mainly disguised as notifications from the administration of Facebook. In November users of MySpace were added to the target group. Users of MySpace received notifications similar to those sent to members of Facebook. They were also informed that their password was changed for better security and that they could the new password in the attached file. Some messages also offered victims to download a utility that would make all changes automatically for the user to be able to access his account after the site’s security system had been changed. The download link directed the victim to a bogus web-site created by cyber-criminals. 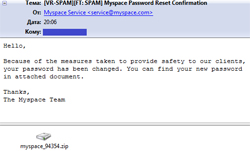 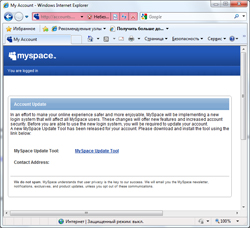 In order to spread malware over e-mail virus makers often fake messages from well-known respected companies. In November they chose to disguise as NACHA. An e-mail informed a user that his electronic transaction had been cancelled and offered to go to the company's web-site for details. From a bogus web-site the unsuspecting victim downloaded another modification of Trojan.PWS.Panda. 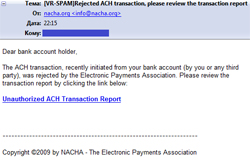 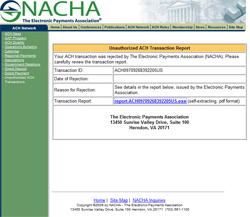 The overall amount of spam related to malware in first two weeks of November remained on the level of the past month. Different mailings with various malicious programs in attachments or with links to bogus web-sites were registered by virus analysts. However, starting from the middle of the past month the number of such mailings decreased by 50 per cent compared with the figures at the beginning of November. However, this downturn is most probably temporary.

The last part of this review is devoted to phishing.

In the second two weeks of November cyber criminals sent users a message supposedly from Google. Composed of few lines of textit offered a user to follow a provided link to learn about a new way to earn money. 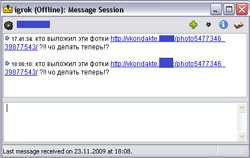 In some cases the link could direct a user to the web-page with a Twitter post containing another link. In other cases it directed a user to a web-page hosted using Google services.