In early November, Doctor Web's security researchers discovered one such program. When instructed to do so, this dangerous bot can send short messages, remove installed applications and files, steal confidential information, attack websites and perform other malicious activities on an infected device.

This new threat to Android is registered in the Dr.Web virus database under the name Android.Wormle.1.origin and comes with a wide array of features. After installation, the bot creates a shortcut on the home screen and operates as the system service com.driver.system. 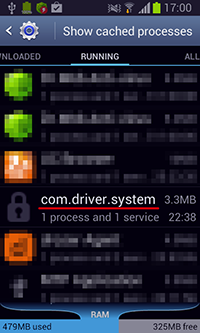 Android.Wormle.1.origin connects to a command and control (C&C) server and awaits further directives from the intruders. It is noteworthy that cybercriminals can control the bot directly via their C&C server as well as via Google Cloud Messaging—a service that enables developers to communicate with their applications on targeted devices with active Google accounts.

This program has a very extensive set of features. In particular, it can perform the following tasks:

Thus, with Android.Wormle.1.origin, criminals can accomplish a variety of tasks, ranging from sending paid SMS messages and stealing confidential data to orchestrating DDoS attacks on various websites. In addition, it can acquire bank account information which expands the program's scope of application even further.

Android.Wormle.1.origin operates as an SMS worm and spreads onto Android devices via SMS messages containing its download link. Such messages may look like this:

Messages like these are sent to all the numbers found in the phone book, so Android.Wormle.1.origin can infect a large number of devices in a short period of time and thus expand the botnet significantly. Statistics collected by Doctor Web indicate that, as of this moment, the malware has infected over 14,000 Android handhelds belonging to users residing in over 20 countries. Most of them—12,946 (91.49%)—reside in Russia, followed by Ukraine (0.88%), the USA (0.76%), Belarus (0.51%), Kazakhstan (0.25%), Uzbekistan (0.21%) and Tajikistan (0.15%). The Android.Wormle.1.origin botnet’s geography is presented in the figure below: 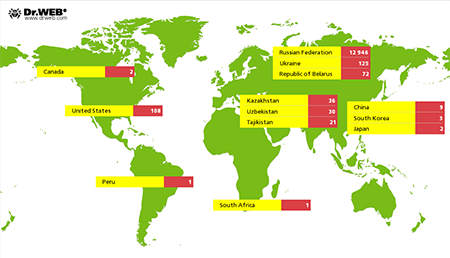 Doctor Web analysts are continuing to monitor the situation closely. An entry for detecting this malicious program has been added to the virus database, so devices running Dr.Web for Android and Dr.Web for Android Light are well protected from this malware.