In April 2014 the mobile anti-virus discovered as many as seven million malicious, unwanted and potentially dangerous applications.

Overall, from April 1-29, 815,293 incidents detected by Dr.Web for Android were registered by the company’s virus analysts. As before, the anti-virus most frequently identified applications containing advertisement modules that generated a profit for the developers of the respective applications. These modules include Adware.Airpush, Adware.Revmob, and Adware.Leadbolt. The SMS bot Android.SmsBot.65.origin turned out to be the most common malware in April—it was detected on 262,267 Android-powered devices. And, having infected 138,407 smart phones and tablets, the SMS Trojans Android.SmsSend.1088.origin and Android.SmsSend.458 are in second place in these rather unusual rankings. The top ten malicious programs discovered by Dr.Web for Android in April are listed in the table below:

When a threat was detected, 47% of users chose to immediately uninstall the malware, while 38.6% removed the apk file from the device’s memory before installation if a malicious or undesirable component was detected in the file.

Most infected mobile devices were running Android 4.1.2. Android 4.2.2 and 4.3 rank second and third, respectively. Summary statistics regarding the versions of Android used on infected devices are shown in the following diagram: 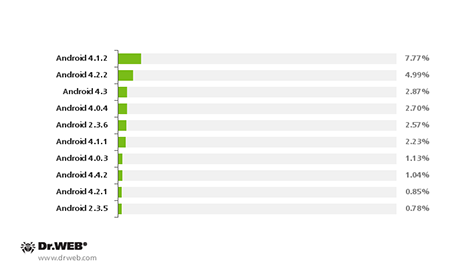 According to statistics collected with the help of Dr.Web Anti-virus for Android, Moscow proved to be the most severely compromised region in April (1.76 %); Saudi Arabia’s Mecca (0.93%) and Riyadh (0.78 %) ranked second and third. Overall statistics on the territorial distribution of infections are shown in the following diagram:

The Geographical distribution of infections by Trojans for Android (April 2014) 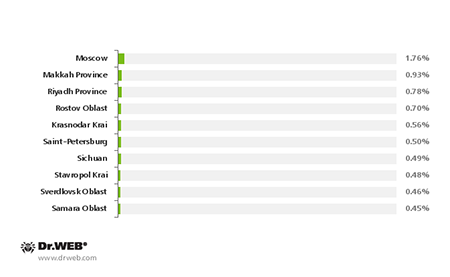 Doctor Web will continue to closely monitor the spread of threats to Android and promptly inform users about new malware.