In particular, in early September a dangerous backdoor that can execute commands from a remote server was discovered, and a bit later Doctor Web's analysts identified the largest known botnet comprised of more than 200,000 infected devices running Android. Overall, numerous malignant programs for this platform were found in September.

According to statistics collected by Dr.Web CureIt!, in September 2013, Trojan.LoadMoney.1 leads among the most frequently detected malware on users' computers. This application is used to download files that are automatically generated under the affiliate program Loadmoney. Trojan.Hosts.6815 ranks second. This sinister program modifies the hosts file to redirect the user's browser to fraudulent or phishing sites. Trojan.InstallMonster.28 ranks third. It is another file downloader, but this one gets files under the affiliate program Installmonster. They are followed by an advertising Trojan dubbed Trojan.Packed.24524 and Trojan.Mods.3 which is designed to replace loaded pages in a browser window. The 20 most relevant threats discovered on computers by Dr.Web CureIt! in September are listed in the table below. 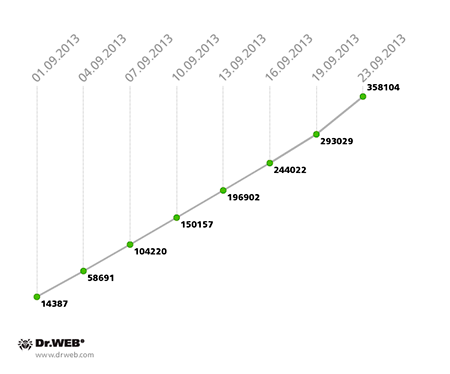 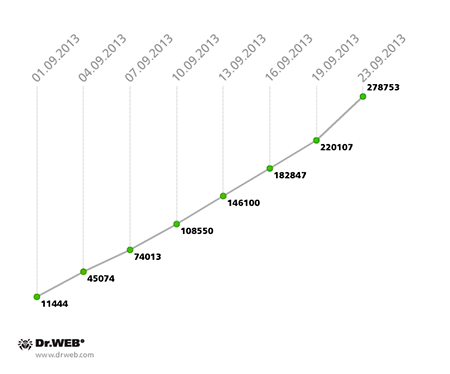 Meanwhile, the botnet comprised of computers compromised by the file infector Win32.Rmnet.16 virtually ceased to grow: in August, its average daily gain was 1,500 infected machines; from September 1-20, the network's daily increase on average didn't exceed 20 infected PCs, and in the last days of the month the growth stopped altogether. The malicious module detected by Dr.Web anti-virus software as Trojan.Rmnet.19 follows a similar pattern: its daily gain of the botnet in September was about 15 infected PCs, and the number of active bots decreased from 5,014 to 4,640. 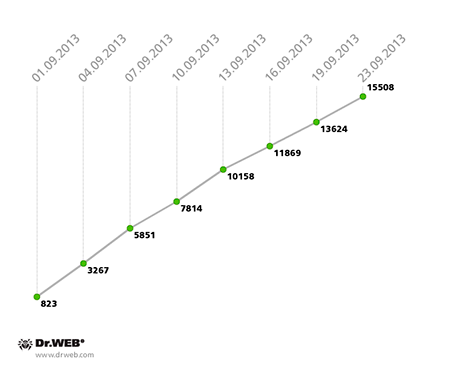 The size of the BackDoor.Flashback.39 botnet, comprised of infected Macs, also hardly changed. By the end of August, it consisted of 38,822 hosts, and in late September it shrank by another 534 Macs and encompassed 38,288 compromised machines.

In late September, Doctor Web's virus analysts discovered the largest botnet known to date, consisting of more than 200,000 infected Android devices. Criminals have used several malignant programs to infect devices and hook them onto the botnet: the recently discovered program Android.SmsSend.754.origin, Android.SmsSend.412 (spread as a mobile browser), Android.SmsSend.468.origin (known since April, 2013), and Android.SmsSend.585.origin. The earliest version of the Trojan related to investigation of this incident is Android.SmsSend.233.origin. It was added to the Dr.Web virus database in November 2012. In most cases, websites owned by criminals and those that have been compromised and used to distribute malware are the sources of infection. 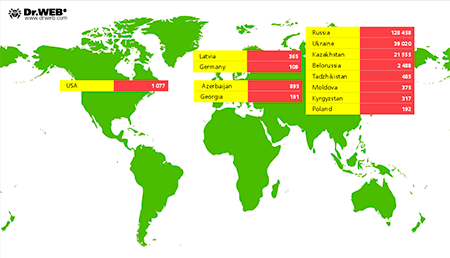 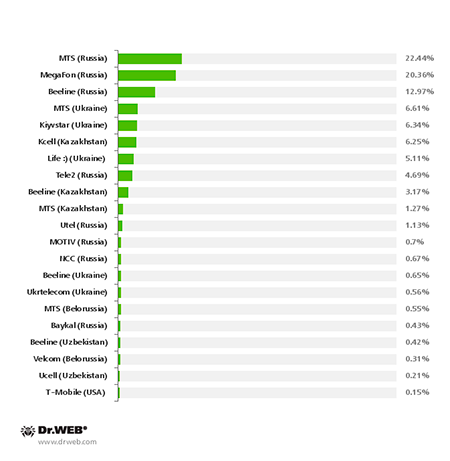 For more information about this botnet and the malware used by hackers to create it, you can refer to a corresponding review published by Doctor Web. 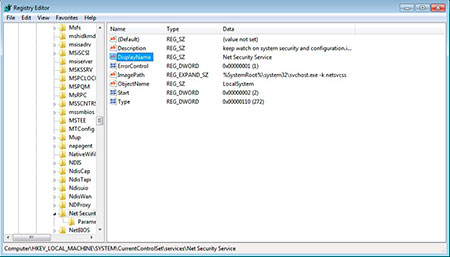 BackDoor.Saker.1 collects information about the compromised system, including the Windows version, CPU frequency, available RAM, computer name, user login and the hard disk serial number, and transmits it to criminals. Next, the Trojan creates a file in a system folder into which user keystrokes are logged. After this, the backdoor awaits a remote server’s response, which may involve commanding the backdoor to reboot, shut down, remove itself, start a separate thread to execute commands via a shell, or even run its own file manager which can upload files from an infected machine, download files via the network, create folders, and delete, move and run files. For more information about this threat, please refer to the review published on Doctor Web's site.

The first month of autumn 2013 was a rather stressful one for Android and its users. Through the entire month, Doctor Web was identifying a variety of Android malware which included SMS Trojans, fake anti-viruses, Trojans and spyware.