To spread Trojans, criminals have created bogus thematic groups in which links that appear to lead to video clips actually are used to run a malignant script.

Entitled Videos Mega or Mega Videos, by February 5, 2013, the thematic groups totalled several hundred. When a visitor to one of these thematic groups clicks on a malignant link concealed by a flash player image, they trigger a script that prompts them to update the flash player. The prompt mimics the look and feel of Facebook.

If the user agrees to install the update, a self-extracting archive containing Trojan.DownLoader8.5385 is downloaded to their computer. Like other components downloaded by the malware, the Trojan has a legitimate digital signature issued in the name of the company Updates LTD by Comodo, so installation doesn't set off any operating system security alarms. 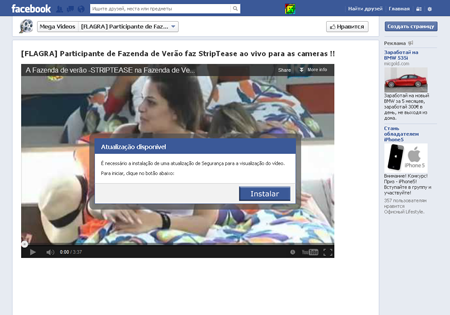 Trojan.DownLoader8.5385 is a typical malicious downloader, whose main task is to download and run other malware on an infected computer. This program downloads plugins for the browsers Google Chrome and Mozilla Firefox; the plugins are designed to send invitations to various Facebook groups and to “like” posts on the social networking site. In addition, these malignant extensions can do the following:

The plugin's configuration file is downloaded from a server belonging to the criminals. The malignant extensions are detected by Dr.Web software as Trojan.Facebook.310.

So, it can be concluded that the current security policy for Facebook applications provides a loophole for spreading malware. All the aforementioned malware has been added to the virus databases and poses no threat to systems protected with Dr.Web anti-virus products. Doctor Web urges the Internet community to exercise caution when visiting groups on Facebook and to install updates only from legitimate sources.