Anti-thief in Dr.Web for Android Anti-virus+Anti-spam

The update also added the Greek language support for both versions of Dr.Web for Android. In addition, the known errors have been fixed and Samsung Galaxy Tab 10.1 devices are supported again. Earlier, the tablet was removed from supported devices list. The decision was based on the assumption that an error existed in the Samsung Galaxy Tab 10.1 software. Whenever a third-party application attempted to read or copy one of the system driver files, it crashed the system and rendered the device non-responsive to any user input. Consequently a full system scan that required access to system files had the same impact. Now when the driver has been excluded from the list of scanned objects, the issue no longer arises during interaction between the system and the anti-virus.

Besides, Dr.Web for Android Anti-virus + Anti-spam acquired new features. Now users can clear the black list by tapping only one button. However, the most important innovation delivered with the update for the commercial Dr.Web for Android is the anti-thief component that will help you find your mobile device if it has been lost or stolen, and if necessary, wipe the confidential information from the device remotely.

You can control the component remotely by sending short messages to the device. If possible, the anti-thief will send a report about the performed action as a reply. Attempting to remove Dr.Web from the device will make the anti-thief block it and request that a user enter a password defined by the device's owner earlier. Thus the anti-thief will verify that Dr.Web will not be removed by an intruder.

With the anti-thief you can: 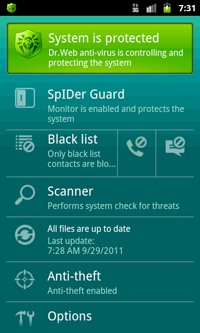 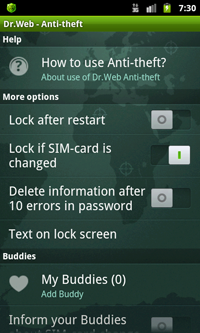 In order to update via Doctor Web’s site you need to download a new distribution file.

The updated versions are also available in other e-stores.