Study of the Spyder modular backdoor for targeted attacks

We already came across the malware Winnti uses when we studied the ShadowPad backdoor samples that we found in the compromised network of a state institution in Kyrgyzstan. In addition, earlier in the same network, we found another specialized backdoor called PlugX, which has many intersections with ShadowPad in the code and network infrastructure. A separate material was devoted to the comparative analysis of both families.

In this study, we analyze the uncovered malicious module, explore its algorithms and features, and define its connection with other well-known tools of the Winnti APT group.

On the infected device, the malicious module was located in the system directory C:\Windows\System32 as oci.dll. Thus, the module was prepared for launch by the MSDTC (Microsoft Distributed Transaction Coordinator) system service using the DLL Hijacking method. According to our data, the file got to the computers in May 2020, but the method of initial infection remains unknown. The Event Log contained records of the creation of services designed to start and stop MSDTC, as well as for the backdoor execution.

We also found traces of other services running that had random names. Their files were located in directories like C:\Windows\Temp\<random1>\<random2>>, where random1 and random2 are strings of random length and random Latin characters. At the time of the study, these services’ executable files were missing.

An interesting find was a service that indicates the use of a smbexec.py utility for remote code execution from the Impacket set. The attackers used this tool to establish remote access to the command shell in a semi-interactive mode. 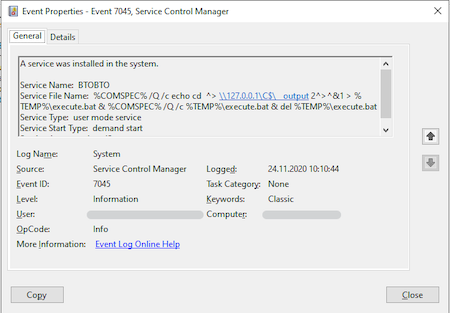 The studied malicious sample was added to the Dr.Web virus database as BackDoor.Spyder.1. In one of the discovered Spyder samples, the debug logging functions and messages remained. Messages used when communicating with the C&C server contained the string "Spyder".

The backdoor is notable for a number of interesting features. First, oci.dll contains the main PE module, but with missing file signatures. Erasing the header signatures was presumably done to obstruct the backdoor detection in the device's memory. Secondly, the payload itself does not carry malicious functionality, but serves to load and coordinate additional plug-ins received from the С&С server. With these plug-ins, the backdoor performs its main tasks. Therefore, this family has a modular structure, just like the other backdoor families used by Winnti — the previously mentioned ShadowPad and PlugX.

Analysis of Spyder's network infrastructure revealed a link to other Winnti attacks. In particular, the infrastructure used by the Crosswalk and ShadowPad backdoors described in the Positive Technologies study corresponds with some of the Spyder samples. The graph below clearly shows the identified intersections.

For a detailed description of BackDoor.Spyder.1 and how it works, see the PDF-version of the study or the Doctor Web Virus Library.

The analyzed sample of BackDoor.Spyder.1 is notable primarily because its code does not perform direct malicious functions. Its main tasks are to covertly operate within the infected system and establish communication with the control server and then wait for operator commands. At the same time, it has a modular structure that allows the operator to scale its capabilities, providing any functionality depending on the needs of the attackers. The plug-ins make the considered sample similar to ShadowPad and PlugX, which, together with the intersections in their network infrastructures, allows us to conclude that it is used by Winnti.