The trojan is a malicious module, which, according to Dr.Web classification, was dubbed Android.Click.312.origin. It is built into ordinary applications, such as dictionaries, online maps, audio players, barcode scanners, and other software. All these programs are operable and look harmless to Android users. Additionally, Android.Click.312.origin only starts its malicious activity after 8 hours after launch, so as not to raise suspicion.

Once launched, the trojan sends the following information about the infected device to the C&C server:

In response, the server sends the necessary settings. Some functions of the malware are using reflection, and the settings contain the names of methods and classes along with the parameters for them. They are used, for example, to register a broadcast receiver and a content observer, which Android.Click.312.origin uses to monitor the installation and updates of applications.

Upon installation of a new application or download of an apk file by the Play Market client, the trojan sends information about this software along with some technical data about the device to the command and control server. In response, Android.Click.312.origin receives website addresses to open in an invisible WebView, as well as links to load in a browser or on Google Play.

Thus, depending on the settings of the command and control server and the instructions it sends, the trojan can not only advertise applications on Google Play, but also covertly load any websites, including advertisements (even videos) or other dubious content. For example, after installing applications with the built-in trojan, users complained about being automatically subscribed to expensive content provider services. 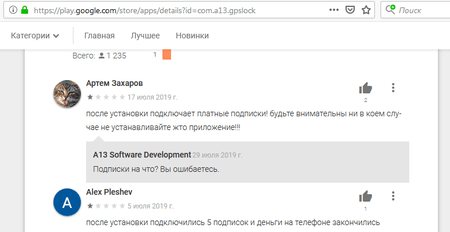 Fig. 1. First user comment: “After installation, it subscribes you to paid services! Be careful, do not install this application!!!”

Developer response: “What services? You're wrong.”

Second user: “After installation, I was subscribed to 5 services and now my phone account is empty.”

Fig. 2. User comment: “What kind of joke is this? Paid subscriptions to Beeline (Russian mobile carrier). I have nothing to do with Beeline.”

Doctor Web specialists were unable to recreate the conditions for the trojan to open such websites. However, in the case of Android.Click.312.origin, this fraudulent scheme can potentially be implemented quite simply. Since the trojan informs the command and control server about the current Internet connection type, the server can send a command to open a website of a partner service that supports the WAP-Click technology if the device is connected to the Internet via a mobile carrier. This technology simplifies the subscription to various premium services, but it is often used illegally. Our company covered this problem in 2017 and 2018. In some cases, no confirmation from the user is required to subscribe to an unnecessary service: it can be done by a script on the same page, or even the trojan than can “click” the confirmation button. Since Android.Click.312.origin opens pages in an invisible WebView, the whole procedure can be done without the victim’s knowledge.

Doctor Web virus analysts have identified 34 applications with the embedded Android.Click.312.origin. They were installed by over 51.7 million users. Additionally, the trojan’s modification, dubbed Android.Click.313.origin, was downloaded by at least 50 million people. Thus, the total number of mobile device owners threatened by this trojan, exceeded 101.7 million. See below the list of programs, where this clicker was found:

Doctor Web informed Google about this trojan, and some applications we had detected were quickly removed from Google Play. Additionally, several applications have been updated, removing the malicious component. However, at the time of this publication, most applications still contained a malicious module and remained available for download.

Virus analysts recommend that developers responsibly choose modules to monetize their applications and not integrate dubious SDKs into their software. Dr.Web for Android successfully detects and removes applications that have the known modifications of Android.Click.312.origin embedded into them, so it poses no threat to our users.